I like this photo because here you can see all my friends, their names are Alejandra, Fernanda and Tania.
I met Alejandra when we were in Kinder, but just became friends when we were nine years old almost, but then when we were eleven years old her mother died, and we established a strong relation, it was  difficult moment for her. As the years went on we moved to the same school, when we were thirteen years old, she was still my friend , but we met new people, among them Fernanda, Tania and Francisca or "Kika" (she isn't in the photo this time).
First, I was a very good friend of Kika, but with the time we started to fight all the time, hahah we faught for very stupid things, then I was a very good friend of Tania. Fernanda was our friend when we were fifteen because at the beginning she didn't like us and we laugh about her  (and this is a bad thing, is bad bullying people).
The photo was taken in Tania's birthday on Monday 7th April this year, by a friend of Tania I think, but I don't know really who took the photo. We had a great day together, we are always accompanied for our birthdays, and I hope that will always be this way. 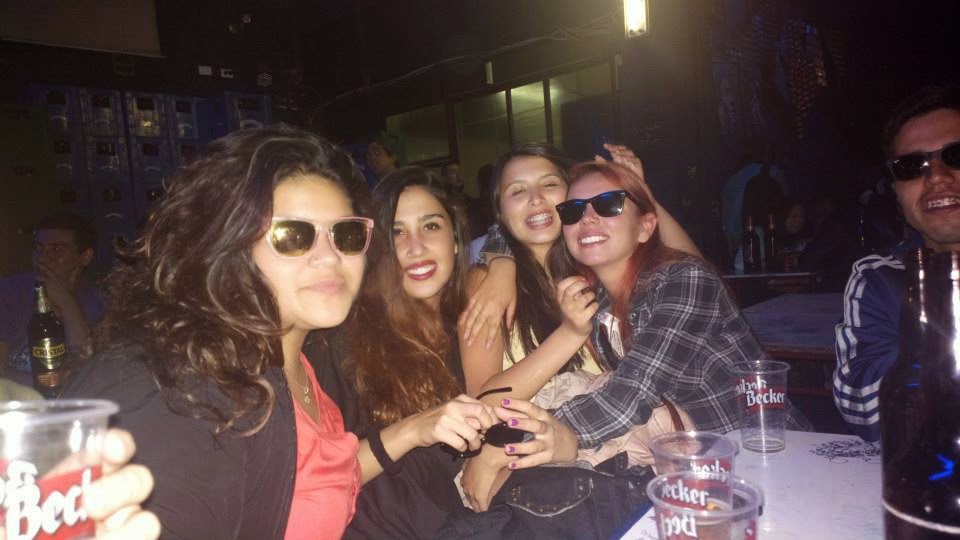 Today I will write about my pet, is a very beautiful dog. He comes to my house when he had just three months, and now he is 4 years old, is an adolescent in years of dog.
He is blond, is the only blond in the family because he is my adopted brother. I love him so much, I love spend the time watching television with him, we watch together show of television about dogs, cats or other animals, I think that this can be so interesting for him, because he watch with attention all the show. I love sleep with him too, because he´s so warm, and this keep me comfortable and happy in the autumn evening.
I never had a pet during many years, all of them is dead in this moment, but i think that Benito (It is his name), can live for a long time and I may play, sleep, and eat with him for many years to come.
Publicado por Unknown en 5:09 4 comentarios:

I really don´t like too much the technology, but this does not mean that I don´t use it every day. For example, I don´t have a super technological phone, I have an old mobile, but with it I can do all I need. I can speak with my family and friends by WhatsApp, review my Facebook many times during the day and I can search for information in Google too if I need it. This is the object that I use every single day since 2011, it was a present from my mother. I really don´t like this object, I think that the phone can drive people away from themselves. It is true that it can be really useful in life but the life without it would not be different, maybe it would be boring, but if I lose my phone, I'll just buy a new one because I don´t have an emotional attachment with these kind of things.
Publicado por Unknown en 5:13 3 comentarios:

I expect that this semester will be good, and can learn in all the subject of the university, to can approve it. This is my major preoccupation because I really don´t have any extracurricular activity in or out of the faculty, I think that have one it would take too much time, and may be  I could abandoned the homework, bust just because in my opinion I don´t have too much free time out the university, and I prefer  pass this time with my family or with my friends, or simply sleeping.
This situation is something that I hope change in the future, I think that I should take some extracurricular activity like some sport, because in my opinion I have a very bad fitness condition, and may be this is something that I expect change in my life.